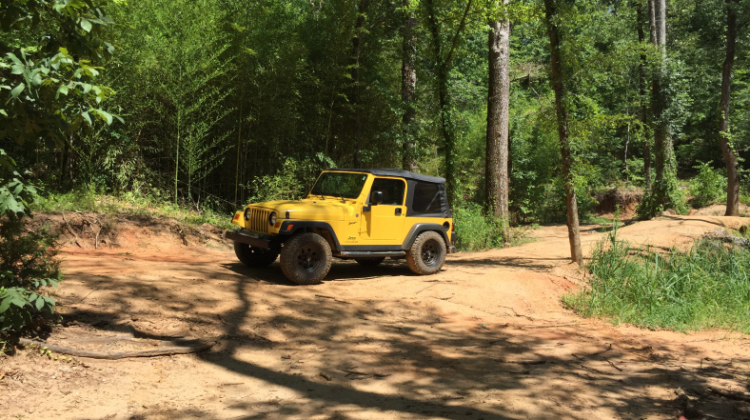 Roughly three months ago, I acquired a 2004 Jeep Wrangler (TJ). I initially put quite a bit of time and money into it: fuel system flush, repair leaking oil pan gasket, cooling system flush, spark plugs, all of the standard “tune up” type items.

Since it came with Chinese no-name tires that wouldn’t balance and Alcoa wheels, thanks to the Rocky Mountain package, I decided to keep 31” tires until I install a 2” lift. This will give me time to really get to know my new (to me) Jeep inside and out and learn what she is capable of in her relatively stock format. The most recent upgrade to get installed before our first road trip were new 31/10.50/15 Goodyear Duratracs mounted on American Racing AR172 wheels. I am now as comfortable as I’m going to get taking a 12-year-old Jeep on a 1000+ mile road trip.  Coming along for the ride is my wife, 17yr old son and 14yr old daughter.

Approximately 6:30am on Friday, July 8, 2016, we were on our way to Gulches Off Road park in Waterloo, South Carolina. Four hundred and forty miles from my driveway in Ormond Beach, Florida to the trailhead in South Carolina. The actual road trip to Gulches was remarkably uneventful. The kids were surprisingly well behaved and didn’t fight at all! Not once did I here, “MOM, HE’S TOUCHING ME!”. Before you know it, we were on our way around Jacksonville, Florida on the 295 North. So far, so good. Temp gauge is where it needs to be, oil pressure, volt meter, all reading normal. The only issue seemed to be the needle in the fuel gauge, which appeared to be magnetically attracted to the “E” on the dash. At one point, I commented to my wife that I think those two are having a love affair because they cannot remain apart for more than an hour or so. But back to the trip. Before you know it, we were in Columbia, SC and stopped at Smash Burger for lunch and of course, another fuel stop. After refueling, we were only about 74 miles from the trail head.

Shortly after 2:30pm, we rolled into the parking lot at Gulches. It was nice to get out of the Jeep again and stretch our legs, but I was eager to get on the trails to see what our new Jeep could do. After checking in, we decided to head to the cabin that we rented just up the road. We unloaded the Jeep to give the rear passengers a little more breathing room, then quickly headed back to the trails. More on the cabin later. The pic below is coming down Trail #14. 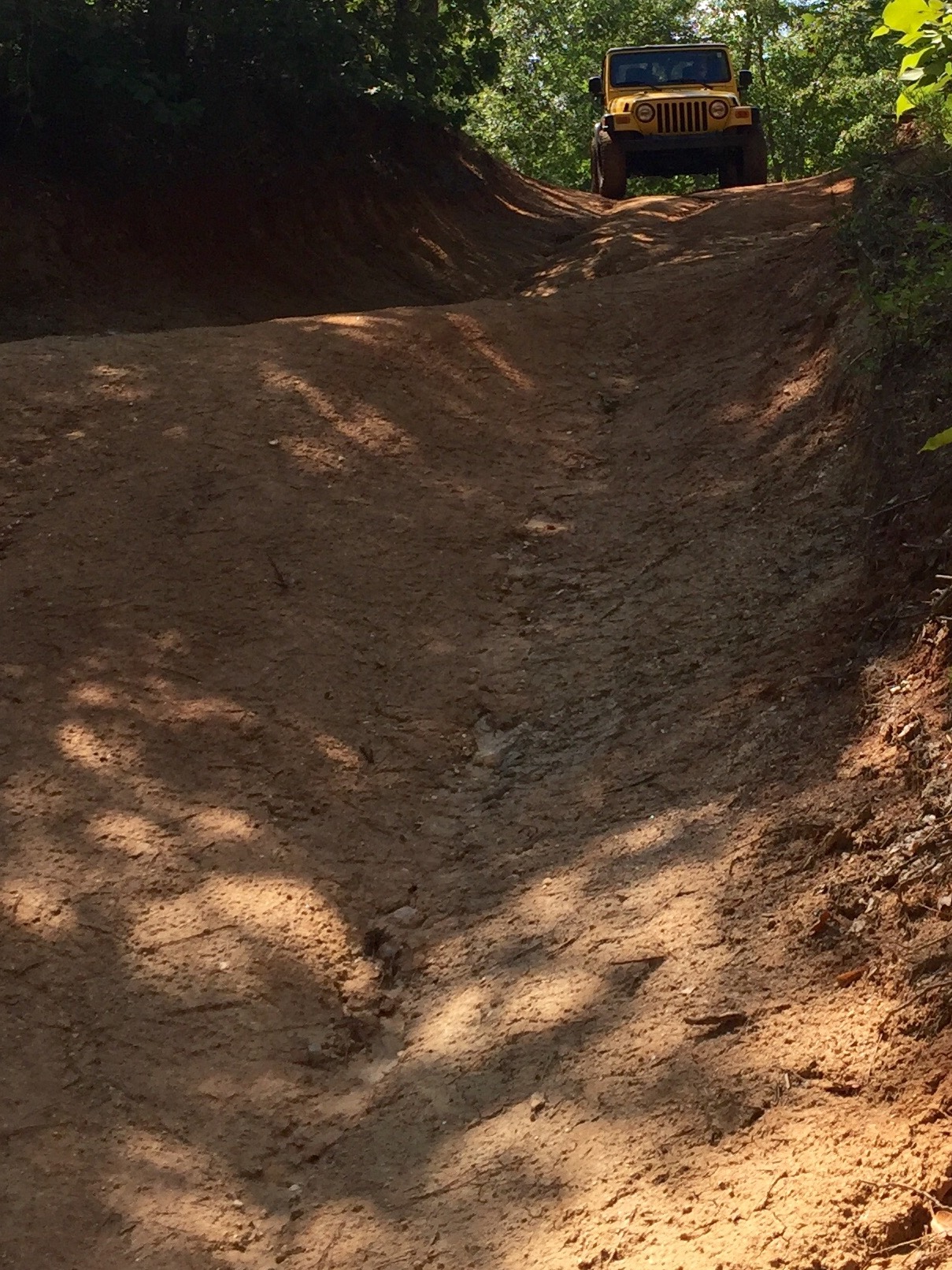 Skip, the owner/manager of the off road park, gave us a quick tutorial about how the trail system was configured and their layout along with a map with notes and highlighted trails that he wanted us to explore today. Tomorrow, Saturday, we will receive a guided tour around to park to cover all of the trails we can do with a stock Jeep. After our “tour” we will be set free to explore on our own, but for Friday’s outing, we felt it was best to stick to the trails he marked on the map. These trails were still pretty fun! There were a lot of steep inclines/declines filled with ruts that were eroded due to water runoff, but there was very little to no standing water on the trail system.

After a few hours on the trail, it was off to find some dinner and supplies for the remainder of the weekend. The closest store was approximately 16 miles away, which wasn’t too bad, but seriously limited on food choices. We settled on a place across the street from the grocery store, but it turned out to be a major disappointment. We briefly considered running across the street to Pizza Hut but my wife was in search of “real food” which later turned out to be a red solo cup filled with chardonnay and several hands full of trail mix, gotta love her. Day one is coming to a close and we are all clean, comfy and hanging out in the cabin playing various different card games before lights out. Good night!

The big day has arrived and we were headed to the trail head for our guided tour. Upon arrival, we noticed quite a few off road vehicles in the parking lot. Wranglers, Cherokees, a modified Suzuki Samurai and a super clean Toyota FJ. Matt, our tour guide, also referred to as a “Park Ranger” by Skip, was in an older Jeep Cherokee on 33s and no front doors. He proceeded to lead the group around the perimeter trail which is identified as Trail #1, #2 and #2a. These trails run clockwise and descend roughly 400 feet by the time you reach the bottom where Trail #1 turns into Trail #2. It’s a fairly easy trail and seems to be the main artery through most of the park until you get to opposite side where Trail #2 turns into Trail #28 (Bad Mamma Jamma Trail) and #17 (Palmetto Krawler Trail). All interior trails are accessible via Trail #2 and #2a and Trail #28 and #17. The back of the park is parallel to the Reedy River, on which primitive camping is permitted as long as you register at the front desk. The trails here at Gulches Off Road Park go from mild to wild. The perimeter trails are accessible to most vehicles in their stock form, but if you feel that you need to get your blood pumping a little faster, there are trails named after how much it will cost you for the park rangers to come rescue you. Two of my favorite trails were #6 and #17. Trail #6 is a short trail but it is fairly steep and is made up of mostly off camber twists and turns that cuts from the back of the park to the front of the park. Trail #17 is much longer and begins with a steep climb which Trail #28 merges into at the top of the hill. Trail #17 continues along a ridge and includes several steep climbs, descents and drop-offs. Speaking of drop-offs, I learned more and more about my TJ as the tour continued. One thing that made itself readily apparent at every opportunity was the fact that I could use a little more clearance. Several of the downhills and drop-offs produced a “clunk” that I attributed to the fuel tank armor (thankfully) doing its job.

One thousand fifty miles later and we have returned home to Ormond Beach, Florida. Overall, it has been a wonderful road trip. Gulches Off Road Park has a lot to offer everyone from stock off-road vehicles to giant 44” tired mammoth rigs.  The trails are well marked and easily identified by number and colored wood squares attached to trees at the beginning of each trail entrance. Red is easy, Blue is intermediate and Black is for advanced trails. Double and Triple Black are much more difficult and may require lockers, big tires, a winch, roll cage or a combination of all four. Most trails are one way, marked with a “1W” sign, but there are a handful of trails that are two way, they are marked with a “2W” sign. If you see a “WW”, do not enter that trail as “WW” means Wrong Way, you are at the end of a one way (1W) trail. For more information on Gulches Off Road Park, please check out their website at http://www.gulchesorvpark.com.

As promised earlier, let’s get back to the cabin. Just under a half mile from Gulches is a cabin in the woods owned by Bruce Chapman and his wife, Renee. The property is beautiful and the cabin is right at home on such a fantastic site. The Reedy River runs through the property providing plenty of fishing opportunities and the wooded area allows for hanging a hammock just about anywhere you could imagine. There are two entrances into the cabin. The front, which is actually at the back of the cabin when you enter the property, has a spiral staircase that leads into a screened porch area overlooking the property. The rear entrance, leads straight into the back of the cabin.

The inside has wood floors, and very nice cabinetry that I believe Bruce himself designed and fabricated. The cabin has a full kitchen with a full size refrigerator, stove and microwave and a window mounted air conditioner to provide cooling during hot summer days. A small round table with four chairs sits in front of the kitchen area and the living room is outfitted with a leather sofa, leather chair and a full size bed. For additional space, there is a single mattress under the bed and a metal frame in the utility shed. We slept four comfortably during our trip. The Chapmans did a fantastic job creating a warm and inviting place to stay when you are at Gulches but please keep in mind that they only rent the cabin to visitors of the off-road park. For reservations or more information regarding the cabin, please contact Bruce Chapman at (864) 861-2654 or (864) 684-9611.

through the eyes of the Average Joe

Thank you for visiting my blog! For many years I have wanted to start a blog, but for one reason or another, I never did. My blog will cover a wide variety of topics from the perspective of the “Average Joe”. To my mom and close friends, I’m sure I'm special, but to the rest of the world, I’m really just your normal, average guy motivated by food and boobs.

I started a blog because I enjoy writing and “telling my story”, but aside from a few requirements for college, I didn’t have an outlet. Most of my entries will be about things I enjoy doing and places I enjoy visiting. I will provide some detailed information that the “average Joe” may be interested in, but I will not fill these pages with stats and figures and other items that will put most of you to sleep. Uncle Google will gladly provide that information to you if you ask nicely.

For the most part, things will be light-hearted and fun. Feel free to get involved by leaving a comment and/or suggestion. I believe in freedom of speech so it’s okay to disagree with my opinion on pretty much anything, but please, just do it respectfully.